SUSIE (Ghosts Through the Cracks)

When I dance to jazz music, I feel free

It’s the weirdest of things, thinking about that life now. It feels like a dream, a sweet dream, sometimes. But so far away that I’m not even sure it was ever my life. I know it will never be again.

I was born on the Dragon Backbone Mountains in the south of China, in what I used to think of as a village and I now would call a group of huts among the rice paddy fields. It was a beautiful place, I knew it even then. I remember the sun on the liquid terraces, the mists before the sun rose. The sweet summers. I do have many nice memories of my birthplace.
I remember running barefoot with gangs of kids, playing jokes on our elders, going hunting for rabbits and other small games. I was quite a good hunter, considering I was a little girl.

My father would always say I was a double disgrace for him. First, because I was a women, the first of five sisters. And second, because I should have been a boy as it was clear by my personality. He would always say that, before proceeding to beat some sense in that stupid head of mine.
I wonder now whether my father was a violent man. I don’t think he was. He never treated my sisters the way he treated me, but maybe my treatment was education enough for them never to do what I did: speak back, speak my mind, act like a tomboy. If this is the case, I’m happy I spared my sisters that fate. By my teen years I had learn do curb my tongue and think twice before speaking up even when the words strangled me in my throat.
I hardly remember what I felt when my father told me he had found a husband for me and I was to cross the ocean to reach him. I had always expected to leave my house, of course. And probably, back then I didn’t really know what it would mean ‘crossing the ocean’. Maybe my father saw it as the only option he had for a difficult daughter like me: selling me off to someone who couldn’t possibly check on me before marrying me. I know – because I discovered later – the man paid quite a handsome amount of money to get me, which was a huge amount of money in my little village. I’m sure my parents lived well enough after that, and my sisters found a good house to be married into. I consider that my last service to my family, because I know I will never see any of them again. 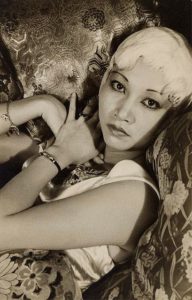 I don’t remember the journey across the ocean. I don’t want to remember. But sometimes it comes back in my worst nightmares. The dark, the choking heat, putrid food. The smell of so many bodies pressed together. The short moments of fresh air each of us where allowed.
I’m glad I don’t remember.
But I do remember when I finally landed in San Francisco, alone. It was a nightmare of its own. It was hell. Nothing was familiar. Not the language. Not the smell of the city and the people. Not the colour of the sun. Not the sounds that assailed me and confused me. I remember the inspection, and the papers handed to me which I wasn’t even sure what were for. I stood in the street with my papers in hand, staring at those incomprehensible words and thinking that was exactly what my life looked like from that standing point.
How did I find the place where my husband was waiting for me? Maybe an old couple of immigrants helped me, someone who had come before me and knew the city. Yes, it was an elderly couple who took pity on me and helped me find the house.
When I got there, finally… my soon to be husband was dead.

Was I shocked? I can’t say so. I was already overwhelmed with everything. This news was just one more brick in the wall I was banging my head against. I didn’t care. I was lost anyway. There wasn’t a place for me in this new land, I knew it from the moment I set foot on it.
But my husband had an associate, they did business together. Import/export from home, as I understood it. Ma Shu took an interest in me. He had indeed carved his niche in San Francisco, but now he wanted to travel somewhere else, to a place he could call his own. I liked that. I liked his drive.
He said he had bought a place in Chicago and asked me whether I wanted to go with him. I didn’t know what Chicago meant, but what did I care? Could be any place. I didn’t care to stay in San Francisco.
I went with him. I went with him in all possible ways.

Chicago did shock me. It is cold, colder than home in any season. And in the winters it’s dark, and freezing. The lake sends wind and snow our way. Always. Always.
Contrary to San Francisco, there aren’t many Chinese in Chicago. Ma Shu set up his place, a speakeasy, he called it. A place where people can drink (which is forbidden by law, crazy as it sounds) and dance to jazz. All night long, if they wish.

I love jazz. Why? I don’t know. It doesn’t sound like anything familiar to me, still when I listen to it and especially when I dance to it, it’s like a part of me is set free. Free, like I’ve never been. So free sometimes I’m scared by that feeling, but never so much not to go back to it every time.
Ma Shu has never be opposed to my dancing. I’ve even joined the show. I dance with other dancers, dance with customers. Ma Shu let me do anything American women do. I can drink, if I want. I can smoke. I can wear shockingly short dresses. He’s never tried to stop me from doing anything. He’s taught me to speak English. He’s taught me to deal with Americans. He’s given me a gorgeous house, beautiful dresses, anything I want.
I owe him so much. I owe him everything.

And now… now I don’t know what to do.

Anna May Wong (1905-1961) was the first Chinese American movie star. She grew up in L.A., daughter of a laundryman. She first starred, at age 17, in Toll of the Sea, a silent version of Madame Butterfly. Her best-remembered film is Shanghai Express with Marlene Dietrich.

She made dozens of films in Hollywood, London and Berlin. She was glamorous; photographers flocked to take her portrait. She was worldly and articulate, with friends like Carl van Vechten, Evelyn Waugh and Paul Robeson. Yet she spent most of her career typecast either as a painted doll or a scheming Dragon Lady.

Anna May Wong could be perceived as a Chinese Stepin Fetchit, someone whose roles reinforced racist stereotypes. But a younger generation of Asian Americans sees her as a pioneering artist who succeeded in a hostile environment that hasn’t altogether changed.