SIMON (Give in to the Feeling)

The dreams fueled my desires and I follow them willingly

The world is changing so fast it is unsettling.

I remember plains of grass extending to the horizon. The sound of the wind swishing among the long green blades. An untamed river. Birds flying in the sky. Where has this maze of concrete come from. And when?
But no, what I remember is a city of wooden houses and people jamming everywhere. Shouts and calls and laughter and cry. Beijing, where I was born, on the other side of the world.

It is hard to remember, sometimes. I can hardly say what part of me is remembering. San Francisco? It’s a haze on the back of my mind, some sort of ‘before’, though I’m not sure before what.
I hated it there. I hated San Francisco the moment I walked out the ship. I was examined, asked questions I couldn’t possibly understand. And then thrown in a part of the city that was like China slapped on the face of San Francisco. Why had I crossed the ocean if then I found myself in China, only without being in China? To be expected to act like a Chinese, only when I wasn’t expect to act like an American – which I’ll never be?
It was just crazy. I was going to let that behind. Soon. As soon as possible. And to do that, I needed money.

I met this men in San Francisco Chinatown, a fellow Chinese from Beijing. A lot older than me. He had started an import/export firm, bringing stuff from home to this new land. He mostly worked for Chinatown, but some of the things he brought in were sold, at fabulous price, to Americans. He made money so easily it was shocking. And worth learning.
I’m a fast learner, you know? He liked that. In a very short time, I became his assistant, then his associate. I learned English fast and good. I learned to deal with Americans a lot better than he ever did. I was learning, and I could see the day I’d leave San Francisco getting nearer and nearer.

Then my associate decided he had gained enough and wanted a family. There were crowds of Chinese in Chinatown, but very few of them where women. So he did what most of us did: bought a wife from home. I thought that was a sensible way to go. I had many women, I mean non-Chinese women. Usually for just few days. But when I set up a house, of course I wanted a Chinese woman. He took contact with home, asked for a woman suitable for marriage. Asked after her looks and personality, and when he was satisfied, he asked for her to be sent over.
Two weeks after this he caught a flu and died.

And the new wife… can’t say it bothered me to have her come here without reason, but it was an annoyance. What would I do with this woman? I didn’t need a wife yet.
But when I saw her…
She was beautiful. Not short, with a stately countenance. Fair skin, sparkling dark eyes, with a lot of life in her. And lost. So lost. I thought I could help her find a way into my life and my bed. She never complained about that.
It was perfect. I had a woman and I had money enough to leave San Francisco with her.

I don’t know how I learned about the speakeasy in Chicago. Another businessman, most likely. I didn’t know where Chicago was even when he told me it was in Illinois. It was fine. I didn’t care where it was, as long as it was far away from San Francisco. And I was happy when I learned there were so few Chinese in Chicago that I was unlikely to ever stumble into.
I bought the place straightaway. 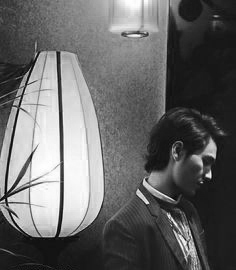 I remember this quite clearly. Early times in Chicago – I don’t remember just as clearly. But I remember the dreams. Strange dreams that would visit me every night. I can’t say I know what they were about, but they were inspiring. The feeling is still with me. They inspired me what to do, what I wanted to achieve and how to achieve it. They gave me purpose, and I gave myself to them. I followed their inspiration willingly. When I lay beside Su Xie in our bed, I always hoped dreams would visit me.
That’s all I remember.
But no, no, I also remember what it was like before. The need to share. The loneliness of not sharing. It was like a drug. I felt incomplete without sharing. Sharing my desires, sharing my aspirations. Sharing my knowledge. It had been normal, before. Before… I don’t know when that before is.
And I don’t know… What would I share? I knew that sharing would allow me to gain, gain what I deserved. But the desire will burn. It will burn everything and it will need to be fed. That’s why I never stopped Su Xie from pursuing her desires. I wanted her to stay genuine, and strong. I wanted her to be happy and satisfied because that would feed her loyalty to me. That would keep her near.

And now I need her more than ever.

Kun Chen was born on February 4, 1976 in Chongqing, Sichuan, China.

He gained a following after appearing in one of his earliest films titled Balzac and the Little Chinese Seamstress. He rose to new heights when he played Chen Qiushui in The Knot.