I’ve always known why I was born and as a young man I willingly chose to follow that path. The path every man should tread, that of defending our people, with our hands and our wit and to protect our land with weapons in hands if need be… though I should have known better than to think my will alone would shaped my life.
We were invincible (aren’t all young men?) but it wasn’t enough. I was at the right place at the right time. It was a victory, but it wasn’t enough. I lost one of my brothers, that day. Then I lost my family, my wife and my daughters. And then my tribesmen and my leader. And then our land was taken from us piece by piece, no matter how fierce we fought, with weapons and wit and mere will-power.
Nothing was enough.
During one of those fights I was severely wounded and that’s when it happened to me the first time. I had seen across the veil before, in dreams and during ceremonies, but when I woke from my wounds, I could see though it even when awake. The grandpa who healed me was the first to realize it. He was the one who gave me my new name, Cansasa. I asked him why that name? He told me one day I would know.

That’s when I met Wewacipi. We were both so lost in a world so different from the one we knew it wasn’t surprising we came together. He always says I saved him, though quite frankly, I think it was the other way around. He was the steady point in a shifting world. My brother.
I trust no one the way I trust him, that’s why I let him convince me to go to the reservation. I hated going. It wasn’t home. But Wewacipi was right. They were my people. 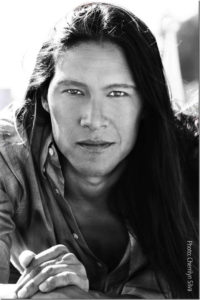 I wish I could erase those years from my mind and my heart. Claw those memories off of me and just bury them where I will never find them again. The Pine Ridge reservation is a prison with invisible walls on a land inside a line written on a piece of paper, a place they call South Dakota. It means nothing to me. My people lived at the foot of the Black Hills, where I was born. Pine Ridge never meant anything to me. But Wewacipi convinced me to go.

Had I been stronger, I may have made a difference. I should have known I wasn’t. I watched my people, cousins, elders, women fall to deprivation and illness, and anything I did was meaningless and weak. I was useless.

Indians don’t leave the reservation these days. We know there’s nothing for us outside. But there was nothing for me inside either. I just knew. I needed to… go.
Wewacipi wasn’t happy with my decision, but he went with me nonetheless. We walked roads increasingly busy with traffic and came to this city, Chicago, where there’s no remembrance of what the land used to be. No connection. Though sometimes the veil still become clear enough to see on the other side.

In this world that makes no sense to me, perhaps it’s beyond the veil where all meaning lies.

Rick was born in a field of corn called Los Angeles but raised on a 100 acre farm with no electricity and a wood burning stove in Crescent City, California. He returned to the city at age 7. He obtained a Bachelors

In addition to acting, Rick is an artist involved in the business of photography with over 9 commissioned pieces. He specializes in Landscapes but also shoots head shots, modeling portfolio, children and weddings. He photographs feature film as well as many high profile events.