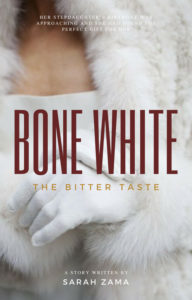 When she entered the room, light welcomed her.

She closed the door behind her and walked in, her steps silent on the polar bear hide spread on the floor. She took her wrap off and let it fall on the puff armchair standing with its twin and a crystal coffee table in the corner with the bookcase. When her white cloche fell over it, the creamy fox fur of the wrap ruffled slightly. She headed to the bar taking from her tiny handbag an object wrapped in thin, almost transparent paper.

The winter day outside was gorgeous, if frosty. The clean, candid light reflected off the snow and filtered through the two wide windows which she had veiled with light curtains as pure as a bride’s veil. Her boudoir was the brightest room in the house, that’s why she chose it.

In front of the bar, she looked into the mirror. 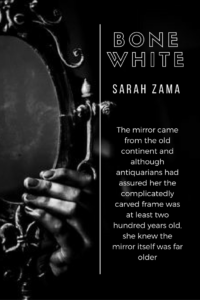 It was a large, oval mirror she had acquired a long time ago, many years before she married. It came from the old continent and although antiquarians had assured her the complicatedly carved frame was at least two hundred years old, she knew the mirror itself was far older.

She looked at her reflection in the depth of the mirror, the glass darkened by age. Her ruby mouth stood out on her powdered face like ripe cherries on the finest linen and only her black eyes, further darkened by smoky makeup, were more outstanding. Her perfect bob was wavy and black, though on closer inspection she noticed a lock of white on her temple. Her mouth curved in an annoyed pout, before she waved the matter away.

She placed the little parcel on the bar bench and unwrapped it, the thin paper whispering in the bright silence of the boudoir. Inside, was a comb made of bone.

Her red mouth formed a light smile. Her husband’s daughter would soon be a woman. In fact, her birthday was just days away. She was satisfied she had found the right gift just in time.

Admiring the comb and its exquisitely exotic design, she reached for two of the crystal chalices and placed them beside the comb. Then she poured a ruby wine from a heavily carved crystal decanter. The wine had cost her a fortune. This wasn’t the bootleg stuff so easily found in the city speakeasies, this was the real thing and only came from across the border. But she didn’t mind to pay. 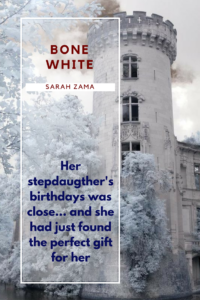 The wine with the white pearl bubbled for a moment, then settled. But the wine with the black pearl started to smolder, thin wisps of dark smoke drifting up. Gently, she blew the aromatic smoke toward the mirror. It brushed against it, slithered on in, then entered it. The face of the mirror darkened further, drifts of smoke swirled in it and, among them, two dim lights appeared. Two eyes, opening on the darkness.

She smiled, then motioned her hands in a dance that mimicked the swirls of the smoke, which sipped back out of the mirror and coiled around her wrists. She dipped a finger gently in the wine with the black pearl, feeling the prickling of the liquid, then let a few drops fall over the comb.

The two drops stood on the ivory surface like pearls of blood, then sizzled, released a burgundy smoke that drifted up, thick like ribbons, pearly in the bright boudoir — then dissolved.

She took up the other chalice and sipped at the wine. It only slightly tasted of the horrible taste of the white pearl. It had taken her many years to find the right quality of wine but it was worth it, she though as she saw a wrinkle at the corner of her eye disappear and the white lock on her temple turning dark.

Swirling the wine, she looked at the unreadable eyes in the mirror. “Then you’ll tell me, won’t you?” Her mouth curved in a sweet smile. “Who’s the fairest of them all.”

Her stepdaughter's birthday is close and she has just found the perfect gift #shortstory Click To Tweet
Tags: 1920s, short story, Snow White